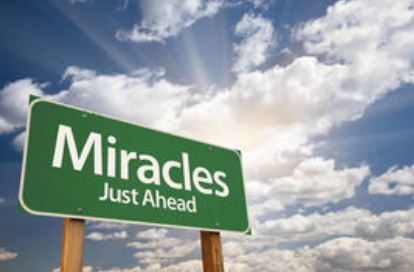 Did you realize that there are times in life where you can initiate your own miracle? We can see in Scripture that there were times in certain peoples’ lives, where they actually initiated their own miracle. I am not saying that a person has any power within themselves to bring about a miracle. I am saying that a person can initiate a miracle from God in their life. Let me give you a couple examples from Scripture.

The woman with the chronic bleeding for twelve years that the doctors were not able to help with, but only grew worse, initiated her own healing. Jesus didn’t say a word to her or even lay hands on her before experiencing her healing. She believed that she would be healed if she simply touched the hem of Jesus’ garment. She acted on faith and was healed. In both of these cases, they initiated their own healing. The power of the Spirit operating through Jesus’ life is what brought about their miracle, but it was they who initiated it.

It is also interesting to note that fear accompanied both miracles. For Peter it was after he began walking on the water and looked down at the waves (probably even some before) and for the woman it was after when she came to Jesus trembling with fear because he was asking who touched him (Mark 5:33).

Fear is an enemy of faith, but it will also accompany faith. It’s the human side of us. The problem is not having a sense of fear, but responding to the fear rather than acting in faith. So we have a choice, respond in fear or act in faith. Acting in faith requires a risk. I have stated many times that faith is spelled R.I.S.K. It’s only a risk because the place you would be stepping is a place of uncertainty and in the natural will not support you. Luci Swindoll (Chuck Swindoll’s sister), said something many years ago that I will never forget, “God offers us security through risk, but we want safety through certainty”. If we base our decisions in life off of safety and certainty, we will miss the miracle that God has for us because we are not willing to take the risk.

Similarly, I have left my secure, good paying career with Cabelas to take on a new job that was temporary. That job has now ended (three months earlier than expected). It was a risk to leave my job, but I know that it is the path to get to where the Lord is leading me. The miracle is coming. In the meantime, there are some things that I am prayerfully moving forward with, trusting the Lord to direct my steps and open doors that only he can open.

So what is the miracle you need from God? Prayerfully consider steps that you can take to initiate it.

Moving toward a miracle,